We’re all missing hockey right now so today we hear from the legendary Goalie on what’s changed at OCs since he joined 25 years ago, his best and worst moments and how he left other OCs for dust to become top #planker.

You’ve been with the club on/off for over 25 years from playing in the 1s and reaching the HA Cup Semi-Final to now dominating the goal as a member of the Stormers. You even enjoyed a stint as the Ladies coach. What’s been your best and worst moments?
Best moment… I would say David Knapp and I winning the Surrey Cup a couple of years ago. At same time realising that it was over 20 years ago that we both lost the final to Purley. More importantly, being the understudy in goal to the mighty Josh Doble.

Worst moment… coaching the ladies and having to get them to meet an hour before training so that they could get all their chat out of the way. Also coaching my fellow uni friends, Helen Hawes and Georgie Sangster who had no respect for me! Another moment was returning to the club and being forced to wear a ‘mankini’ to help raise money for the new pitch! 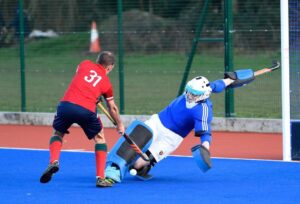 How has the club changed from when you first joined?
When I started playing for OCs many decades ago, the Club was in a good place with a great crop of senior players who welcomed young players. They looked after us. Now a lot of those young players are still at the club, hopefully doing the same to the next generation.

The club is now so joined up with both the rugby and hockey working together (such as the Juniors), making it family orientated. From making it into National League to bringing people back into hockey, getting where we are as a club has taken a lot of work by many amazing people and I feel privileged to be a part of it.

What should we know about the Stormers? How was the season going pre-lockdown?
The first thing I learned is that their warm-ups are short and more time is spent talking about who has the most injuries.

This season we have been able to further strengthen the squad, bringing in more people with a ‘I don’t want to lose’ attitude. This has led to us being top of the table before the last lockdown. There are four more games to play and even teams who are 6th (OGs) can still win the league. Plus, we have a strong Captain in Matt Heslop (so that should be selection sorted).

You’re a top #planker, leaving other OCs for dust. How is this possible?
It even surprised me! If the exercise is static, then I’m all over it. What helped was listening to Guns N’ Roses’ November Rain and seeing if I could last as long as Slash’s 6 min 20 sec guitar solo. I got lost on where that point was in the song so just had to keep holding on!

Finally, when we can get back to the club, is it all about JJ’s fajitas or burgers?
Easy, 100% the OC burger (with a fried egg). It’s second to none. A tip I learnt from Cookiey is that once you get your burger, leave it for five minutes so that the egg yolk hardens a bit.