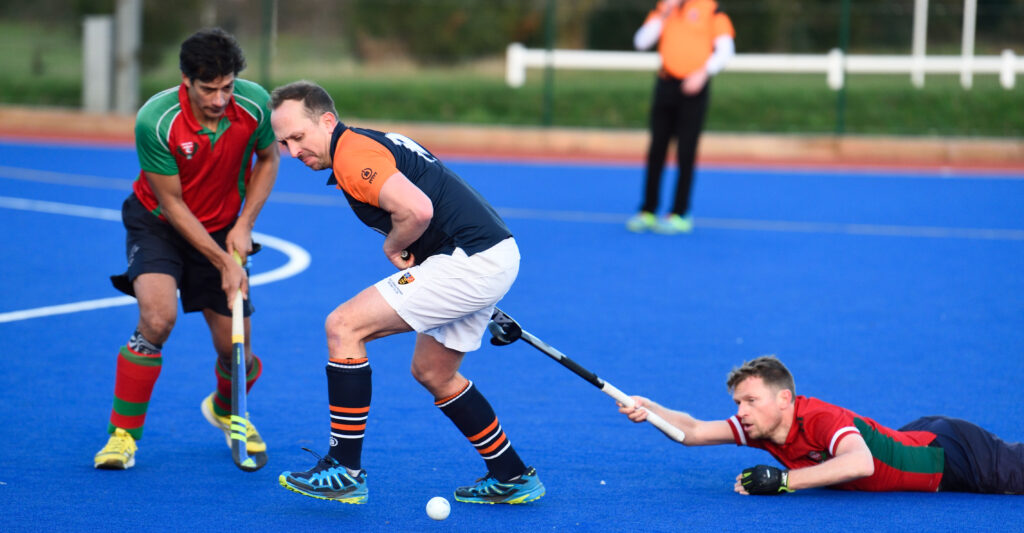 We kick started the new decade with five home matches on Saturday and six away. Our Ladies 5th XI secured their first win of the season and our Ladies 3rd XI continued their winning streak with a fantastic 6-1 win. Our Men’s 5th XI remain unbeaten and our Men’s O40 won their second leg of the England Hockey Cup 4-1. 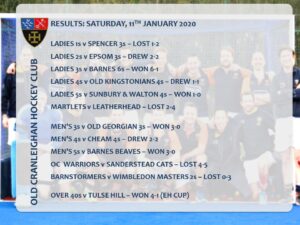 Men’s Over 40’s 4 – Tulse Hill 1 – EHA Cup match
The long march towards Lee Valley continued with a hard fought but eventually comprehensive win against Tulse Hill on a sunny Sunday at TD. We started well, having the better of the opening exchanges and should have really gone in front but for a slightly uncharacteristic miscue from CB who had the goal at his mercy.  Tulse Hill grew in confidence with their 2 front men providing a threat predominately through their pace. They forced a couple of penalty corners but Goalie and the rest of the defence dealt with them pretty comfortably. With around 10 minutes to go in the half, Jody and Nick Ripley combined beautifully with a slick 1-2, which put the Junior ripper through on goal, and the clinical finish was duly applied. There was still time before the break for Ports to add to his yellow card tally , this time for a perfectly timed tackle on their breaking centre forward. Watch the replay, we need VAR. 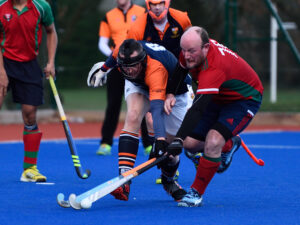 The 2nd half was a bit of a grind, once again we had the majority of the possession and territory but never felt 100% comfortable given their threat on the break. However any major concerns were allayed when we forced a scrappy second through Gav (or maybe CB, nobody seems to remember). Gerry then popped up with a great deflected strike from a Matt Heslop crash ball to make it 3-0. (Again some people are saying this was the 4th goal but don’t let the truth get in the way of a good story). From there it should have been plain sailing but yours truly managed to deflect a crash ball straight to the Tulse Hill striker who eagerly finished past Goalie from point blank range. Goalie  was rightly fuming as he had been rock solid throughout and deserved a clean sheet. Sorry goalie. Thankfully any thoughts of a Megan Markle-Esque come back where crushed when we added a 4th late on – I’m awarding this to CB but it could have been Gav – I’m passed caring. We could have added even more gloss to the scoreline if we had managed to convert a couple of our short corners which looked particularly slick if only for the final application. Anyway another solid win at Fortress, on to the next.
Men of the match awards go to the Ripley brothers because apparently they scored a bunch of  goals , provided all the assists and even chipped in with some co- assists which is some new cool thing I’ve never heard of. I’m claiming one for their goal though.

Ladies 2nd XI 2-2 Epsom 3s
With Epsom sitting one point above us in the league, we knew this was going to be a tough first match back after the Christmas break. As they started to arrive, we could see they had lots of young legs so we were going to have to come out fighting and make the most of our 5 subs. Unfortunately, things didn’t quite go to plan and Epsom scored meaning we went into half-time 1-0 down. Whilst we knew that we were going to have to increase the intensity for the second half, it still felt like our game to win.

Unfortunately, Epsom scored again fairly early on in the second half. After a few goal-mouth scraps (those on the bench at the time are still not sure how the ball didn’t make it across the line), the Barnstormers started to arrive for their match. Spurred on by the extra support, we finally upped our game. Amy made a great interception and drove the ball down the right-hand side before laying off a beautifully weighted pass to Georgie who hit a cracking strike into the back of the net. With this goal in the bag, a draw or win definitely felt in reach.

The game continued to be end-to-end, but our defence stayed solid and Epsom didn’t have many opportunities to increase their lead. After yet more goal-mouth scraps at our end, and with the score still at 1-2, we were running out of time. But with just 2 mins to go, we were given a PC….which Ellen rocketed home to equalise for OCs. A draw was probably a fair score on the day.

Great to have Ali F-R back on the pitch, and thanks to Lizzie and Amy for their support and help running the bench.

Joint PoM to Amy and Georgie

Sunbury & Walton Hawks Ladies 4’s 0–1 OC’s Ladies 5th XI
There was a definite feeling of who ate all the mince pies as we (slowly) warmed up for our first post-Christmas match, but happily we got off to a strong start with the majority of the possession in the opening half – which paid off not long before half time when Rachel C scored from the edge of the D with a truly beautiful strike at goal. The second half saw some good possession from OC’s with our midfield combo of Rae, Lucy W and Claire controlling the ball beautifully and Zoe and Rachel absolutely owning the game at centres mid and forward. Alas we couldn’t convert our pressure into goals before S&W earnt themselves three successive short corners, the last of which ended in a heart-breaking goal. Imagine our collective relief when the head umpire over-ruled his colleague and disallowed the goal. (We have to confess to total bafflement as to why from the majority of the L5’s…thanks Cookiey for the much-needed
hockey rules brush-up at Monday training ��) The last quarter saw a sustained period of pressure from S&W and resulted in some seriously impressive saves from superstar goalie Ailsa, including one particular dive with proper wow-factor! The Hawks were throwing everything they could at us to even the score, but our defence were equally determined not to let them get their way. Together the back line made a fiercely impenetrable wall, with Tess and Isa deflecting the ball brilliantly out of the D. It seemed as if the final whistle would never blow….and when it did it’s fair to say the OC’s 5’s went completely mad.

Having not tasted victory for a few weeks (months?) we can’t pretend to have been anything other than overly-jubilant in victory. We really must practise our ‘gracious winners’ reaction rather than screaming ourselves hoarse! Let’s hope we get more practice at this next Saturday!