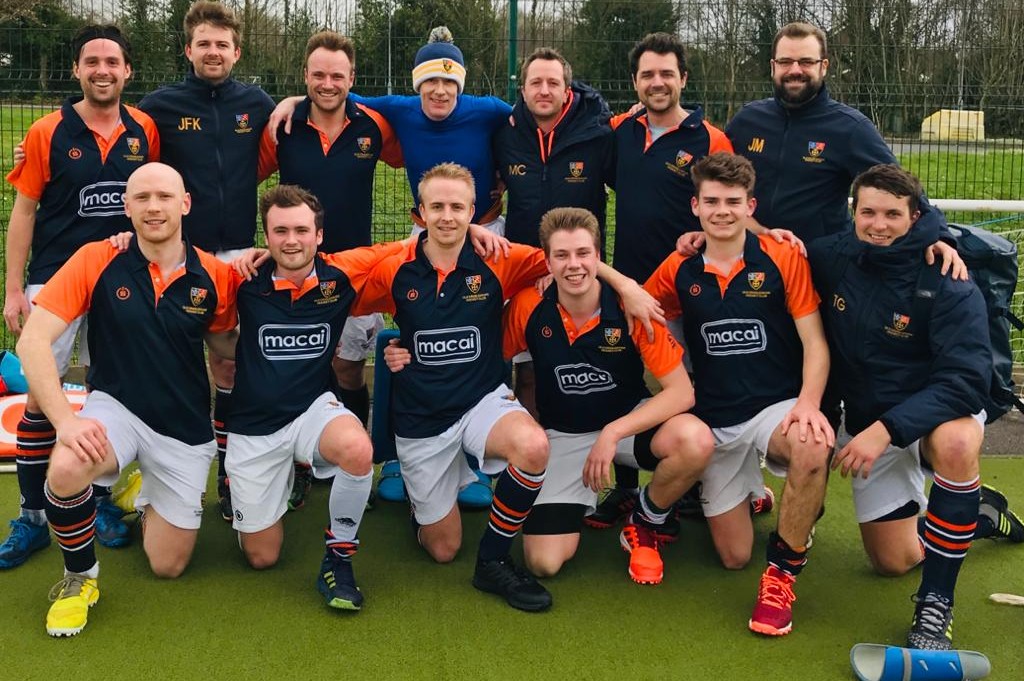 Cheltenham 3-5 Men’s 1st XI
On the back of a good start to the second half of the season, in which we had taken back top spot in the league, we made our way down to the West Country to take on Cheltenham Hockey Club.
We asserted pressure from the first whistle, pressing high and setting the intensity. The first goal however went to Cheltenham. A calamity at the back as Josh Doble left a ball which rebounded off the post and into the path of a Cheltenham forward who calmly finished to make it 1-0. Going behind first for the second time in two weeks urged us on and with the press and intensity raised further it wasn’t long until we broke Cheltenham down. Some good work down the right hand side from Jack Smart led to space opening up in the circle for Charlie Lamb, who in the goal scoring form of his life, finished with ease.

With the game in the balance at 1-1 and knowing how important the next goal would be we pushed on. Will Marshall, coming off the back of a man-of-the-match performance last week, advanced up the pitch, found space inside the oppositions circle and coolly finished through the keepers legs to make it 2-1. With our tail wagging and the pressure mounting it came as no surprise when Charlie Lamb found space in the circle again and expertly finished into the side rigging for his second goal of the game. A solid first half, one of the only down points coming from a moment of pure madness from Jack Smart which saw Hugh Robinson take an aerial to the head from point blank range. Luckily for us he took it like a warrior, nonchalantly shrugging it off and preceding to play the attacking hockey he is renowned for.

We started the second half slowly, allowing Cheltenham to grow back into the game and it came as little surprise when they broke the second half scoring first, finishing well to Josh Doble’s right. Caught napping, we kicked back into gear. A good piece of pattern play down the right hand side saw us earn a short corner. Will Marshall stepped up and fired his drag flick low to the keepers left leaving the score 4-2. The preceding 15 minutes saw some end to end hockey, with neither team really taking a firm foothold in the game. With 10 minutes remaining and the game in the balance Cheltenham pounced, firing an absolute rocket into the top left corner from a rebounded drag flick. At 4-3 we looked under serious pressure, but luckily for us the returning Matt Murphy, who looked like he hadn’t had a moment away from the pitch, stepped up, dribbling past 4 of the Cheltenham players and firing low to the keepers right.

The game finished 5-3, a good 3 points away from home but certainly not our strongest performance. We will have to improve next week against high flying Bristol if we are to retain top spot.

Andover 1s 0-3 Men’s 2nd XI
Rolling down in the Car with Happy (Pre Rugby) Henry, Moody Beersy and SatNav Cookie. We knew this was a game that was going to define our push for promotion, against a talented Andover team who had an ambition of promotion as well. But after the game and this report, they would find themselves more looking behind at relegation than top 2. There was great preparation from people such as Coops – coming off his bike, sliding 2m on his back with big grazes on his hand, on the way to CJ to get the train to the game – and FRJ decided to do his warm-up before even getting to the game. By running 3km to be 30secs late for original train time, lucky it was 3mins delayed. The game brought us our second to last away game of the season in blustery Andover of the M3. Coming into the business end of the season we found ourselves short on selection. But we were able to call on two legends of the game, Sheps and Carne. For which they produced such games. The team’s focus and grit were heightened with the news that Beersy (Manager / Coach – Whatever) was kitted up and ready to come on at any stage. But we knew what had to be done and it was going to be done by hard work and simple hockey.

Now I would go into the first half but there were issues with our two legends in the warm-up. Carne injuring his leg so he could only turn right. But fair play he adapted his game to play all 70 mins and not look out of place. Then there was Shep, slipping and deflecting a straight-forward pass into own nose in the warm-up. Class…!!! The game began with OC’s adapting our tactics due to numbers and not full pressing and running ourselves into the ground. This worked perfectly for us and kept us controlling the game. But Andover is and was a dangerous team on the counter. Creating several opportunities that were even dealt with by the back 4 or goalie stepping in. Then once we had soaked up the pressure we were able to create opportunities of our own. Leading to the first goal by Cookie on 15 minutes. Great work down the right from FRJ and his silky hands. Lay off to DR for Cookie to convert. About as much as I know about that goal. Which is more than I know about the second. With OC’s 1-0 Andover attack and produced several short corner opportunities. Of which Goalie save a drag flick. But deflected onto JFK’s head as he stood outside the post. Of which the umpire felt that was enough to award a stroke. Andover player did the usual stare at the opposite part of the goal and flick it to the other side. Read and saved easily by Goalie. What a legend….!!! Meaning Andover’s confidence was shaken again and it was about to get worse with great work from the midfield carving out an opportunity to Dan Ladd, of which he needed no second invitation and buried into the next to make it 2-0

So the second half, being 2-0, both teams know that the next team to score would mostly win the game and take the precious 3 points on offer. But no one took into account, no one scoring and OC’s defence standing firm and solid to anything that Andover through at them. And that is exactly what happened. With Gal using his aerial bombs to go route one and get us out of any additional pressure. Much to the vocal frustration of the partisan crowd. Comment to them, If it ain’t broke don’t try to fix it. Time in the second half moved quickly with OC’s in good control. Andover pressed and pushed as much as possible but was unable to crack OC’s steadfast defence. And 2-0 win to OC’s is where it finished. So at the end of the day, we came out with a very well deserved, hard-fought game. Leaving an Andover team wondering how they had not scored, let alone win. Why could they not deal with Gal’s aerials from just about 90% of our defensive outs? In my option everyone was MoM and it seemed that everyone celebrated in some way or form, wherever they were. Roll on Haslemere at home next week. And social afterwards.

Men’s 4th XI 1-3 Surbiton 5s
A disappointing result in a game where we had started so well, going ahead after three minutes. But that lead lasted less than 30 seconds and after an even first quarter we slowly went off the boil and could have few moans about the final outcome. There were more teenagers on display in both sides than adults which bodes well for the future, and our three under 16s all acquitted themselves well.

Our youngest player was 15, our oldest 60. The 45 year gap must constitute a club record. And the older player, after (allegedly) being hit on the knee then proceeded to unleash a stream of Anglo Saxon that few had heard before on late night Channel 5 let alone mid afternoon on the astro at TD. He immediately withdrew himself from the game to recover/stormed off in a huff and sat muttering in the dugout. Our other senior statesman and former captain, not to be left out, later let rip at the umpire and was banished to the sidelines. It summed up the day.

Ladies 2nd XI 3-0 Leatherhead (Friendly)
This weekend we played a friendly away against Leatherhead. We had a disappointing draw last weekend so hoped to come out with a win this week by working on what we have practised in training. The first half started slowly but then we managed to pick up the pace and score our first goal through a pass from Rachel into Ellen who tapped it past the keeper into the back of the goal. 1 nil up and we got into the swing of things. We kept fighting and maintained most of the possession. Our second goal came from great work down the left by Laura who used her skills to get past five of their players to power it in the back of the goal…maybe not so much power, but a gentle nudge through the legs of the goalie!

After half time we came on strong, still not conceding a short corner. The ball was passed up to Liv who ran it down the baseline and across the D,then pushed it pass the keeper into the corner of the goal!! The opposition made a few breaks but were put under pressure by our full backs who were able to prevent any goals and help Hannah in keeping a clean sheet. Short corner on the final whistle but unfortunately we were unable to be convert. Overall a strong win!