David Knapp reports on a lovely day out in the west country. And fails to mention he scored both goals in the 2-0 win over Bristol & West HC in the EH Cup tie …

As I left a Spring like Surrey with clear blue skies hopes were high at not having another game of aqua hockey a la St Albans game with the RSPCA having put the report of a yellow Beluga whale struggling in the shoreline water at TD down to a childish prank.

From J12 of the M4 and until J17 the thought went back to flippers and snorkels as it right royally tipped it down only to clear and end up being a bright and clear day. Oddly the match played out in a similar way with us finding choppy waters for the first 17 minutes, weathering the storm and piloting ourselves one step closer to Lee Valley.

The sound of the sea gulls near the ground suggested we were all on a Sunshine Variety old peoples trip to the coast only for the whiff coming into the car being from a large landfill site rather than the sea. We were in the heart of the west country.

The banners on the outside of the pitch referred to Bristol and West being the friendliest club in Bristol and so it proved to be. As the first to arrive I was greeted by all the oppo with “you must be Howie” which I was very quick to deny and for good reason when the “who is the weirdo veggie” calls came out when tea was served. A first-class bunch of Bristolians made sure their banners were true to their word.

Before we embark on what happened during the game this whole weekend was a big one for Evo for many reasons as he:-

1 turned out for a cup match instead of going skiing

2 set a new club record when playing for the Warriors with their being a 49 year difference between him and the youngest player, Max, who could legally be Evo’s great grandson and

3 seemingly is being regularly reinvented as “The Samsung 850 Evo is a hard act to follow – it’s still one of the best SSDs we’ve ever used, so the Samsung 860 Evo has its work cut out for it. Ever since it released in December 2014, the 850 Evo has enjoyed its prominence, thanks to fast speeds, tested endurance and great value”. ( I can only assume that this is a false internal marketing claim).

Luckily, the Samsung 860 Evo follows in its footsteps successfully, with faster speeds and even better endurance. After thoroughly testing both the 2.5-inch and M.2 SATA versions of the 2TB Samsung 860 Evo, we can confidently say that it’s one of the best SSDs on the market right now. Answers on an email to Martin as to what “SSD” stands for.

Not to be accused of resting on his laurels there is another version coming out, the Samsung 970 Evo Plus

On the 13 of us eventually convening and after a non existent warm up we started by being put under cosh for the first quarter and a bit and omens were looking bad. Crumbers sorted all that out in a flash. Passing to their centre forward at the top of our D, with the Beluga version of Howard not quite expecting that to happen, Crumbers proceeded to take the ball off the line and gently deflect it round the post. “Hey mate I am Rob Bertie Big Bo**ocks Crumbie, you need to do better than that”. 2 minutes later we raced up the other end, won a shortie, had our shot taken off the line by a foot and stuck away the stroke. 1 – 0 up very much against the run of the play. Bertie had a wry smile on his face. We went into half time 1 up. 20 seconds into the second half and reminiscent of Tipuric’s try on Saturday we scored without the oppo touching the ball following a measured pass from Wrighty, clearly inspired by wearing his younger son’s shirt, splitting the defence to take out the bulk of their team. Their heads dropped. Burles’ head did the opposite however as our learned friend has since admitted “I nearly missed the second goal entirely, as I was still picking the bits or orange out of my teeth and putting the finishing touches to my bootlaces!”

From that point onwards we could, and should have, scored more albeit predominantly on the break. Our midfield and defence soaked everything up and snuffed out any danger giving a glimpse of goal to B &W by way of only a handful of half chances. This was a squad effort with each of our 13 man squad pulling their weight and not giving an inch. With his white version of Fabien Galthié’s glasses Andy snuffed out their danger player on their right.

As the old adage goes “wanting to win is a better stance than expecting to win” and so it proved on Sunday as we definitely wanted to win the game. B & W did not expect to lose.

The semi final beckons with one of Eastcote, Shrewsbury or Belper to play. Not that the draw needs manufacturing but let’s hope that EH remember this is an amateur sport.

With the 1s and 5s top of their leagues with 2 games to go, the 2s in second and our O40s also facing a semi in their cup competition one could be excused from concluding that some of the magic dust has blown across the railway during storm Dennis from the cocky gods, sorry, my poor typing, hockey gods Surbiton and settled on us. Alternatively we may just have done this ourselves … 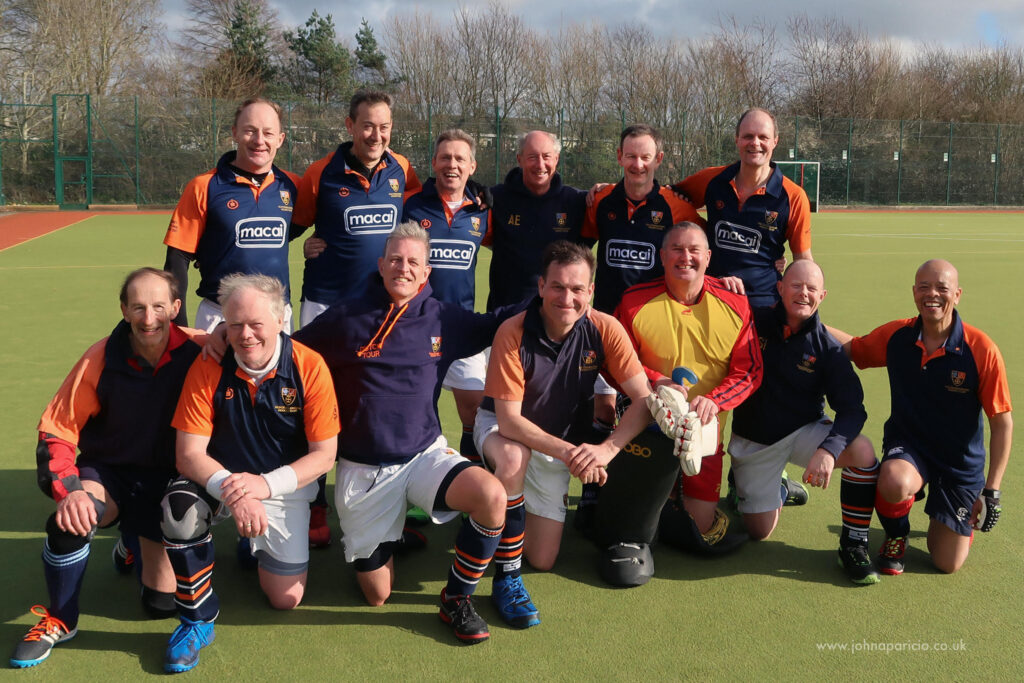