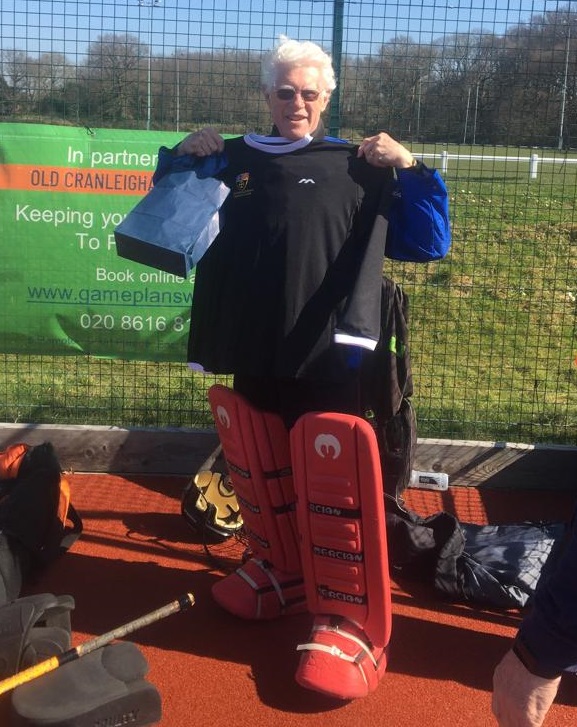 The term ‘club legend’ is one that is often liberally bandied around. There are, of course, any number of people who have given, and continue to give, so much to help make OCHC the wonderful club it is.

How many, though, can say they are still playing hockey at the age of 80? The answer would appear to be (as in the Highlander movies) that there “can be only one”and that man is Craig Wilson, the silver fox who plays in goal week in, week out for the Hamstrings (the Over 50s team for which he is definitely over qualified) and who, following an extensive search of club records, appears to be the oldest person ever to play for the Club. And he’s not done yet.

Despite having been in the UK for longer than one or two of his team mates have been alive, Craig retains his native Canadian accent and, as someone who grew up playing ice hockey (either left wing or in goal), there is a good back story as to how he found his way into playing field hockey instead.

Arriving in the UK in his 20s, Craig took a Masters degree in civil engineering at Birmingham University, the deciding factor being that it was a one not a two-year course. He was funding it himself, after all. There’s only so much to do in Birmingham so, after finding himself somewhere to live, becoming acquainted with English pubs and girls (one of whom he would go on to marry), he was left looking for something more interesting to talk about than civil engineering and Molson Lager?

Finding himself at a loose end one night, Craig was persuaded by a flatmate to try hockey out, the grass version than on the one on ice. When he let slip that he’d played in goal in ice hockey, between the sticks he went. Protected only by a pair of cricket pads, a box and his lightning reactions to make sure no balls flew up and risked his matinee idol looks, he started his field hockey journey.

Craig played for Cheam for over 40 years where he was a regular – his only noted time off during any of those seasons being a seven-week period when his friend and skipper at Cheam (fellow Hammies regular, Derek Wright) fired a shot in a warm-up and broke Craig’s thumb. Wracked with guilt, Derek played in goal during Craig’s absence.

After so long at Cheam, retirement beckoned. But, as with so many early retirees (he was by then over 70), OCs had other ideas and Craig was persuaded to join the Hamstrings while their regular keeper recuperated from a hip injury. That was six years ago, since which Craig has become a stalwart for the team, rarely missing matches, successfully defeating cancer and doing his best to stop opposition teams from scoring any goals. His agility and enthusiasm belie his years and his team mates hope he keeps going for a good few years yet.