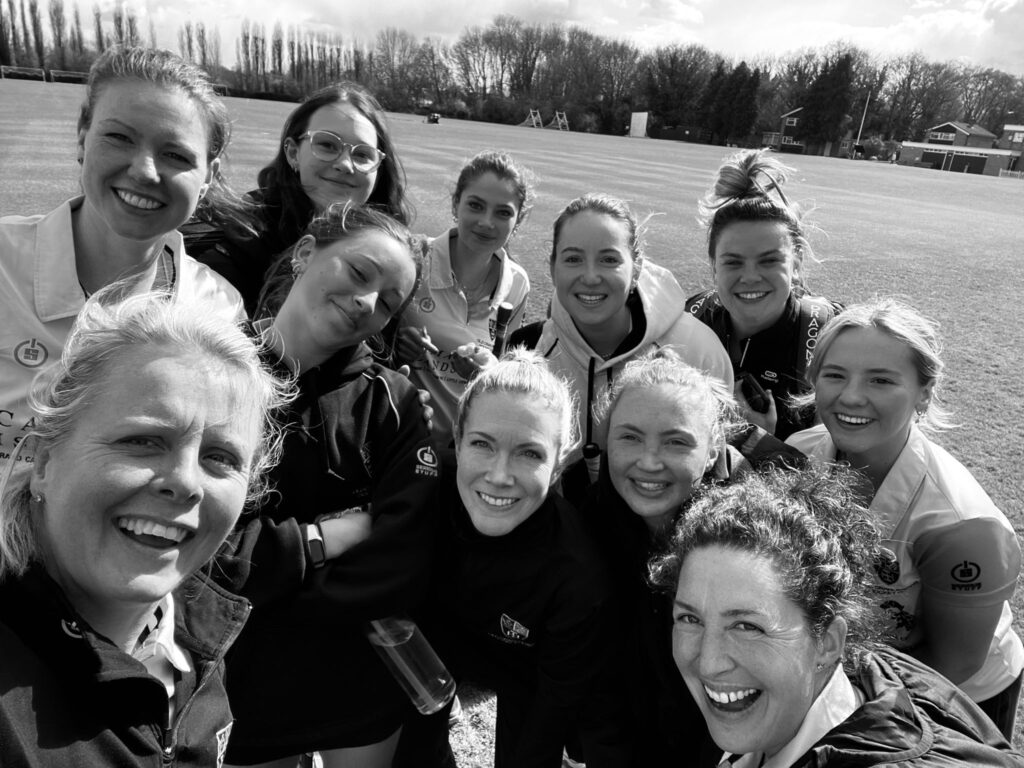 The Ladies 1st XI completed a remarakble season with victory in their final match – their 17th on the trot – to secure the London Women’s Division 2 South title and with it promotion. Here’s Molly’s match report …

It’s wonderful turning up to the last game of the season with the barest of players. There was a lot of pressure going into this final game. We had 16 wins in a row under our belt and we had to win this weekend to keep our promotion hopes alive.

In the London league, Division 2 is split into two parallel leagues – North and South. In our (South) league, we were sitting in 1st place on 57 points, but London Eds, who were in 2nd place, were on 55 points, but with a game in hand. In the North league, London Academicals 1s (57 points) were narrowly leading London Wayfarers 3s (54 points) but were a long way ahead of 3rd placed Wanderers 2s (37 points). Everything was to play for, as only the best placed 2nd position would be promoted.

We arrived at OKs ground, ready to play. We knew we had to conserve our energy, with minimal rest time for players, and deceptively warm weather, plus one of our team mates was carrying an injury! Coach Moors gave us an inspiring team talk, with an adjustment of positions, in order to give us plenty of defensive support, with such a depleted team.

After a joyful warm-up, captain Richie, who was playing her last game for us, decided to be rather irresponsible and hide satsumas in my hoodie… Now for those who don’t know, I have a massive phobia of oranges – and they make me cry. I understand the danger I am putting myself in by writing this, but it is also the reason I am DOD.

As the match began, we linked up fairly well, making good passes, but weren’t overly helping ourselves. We weren’t dictating the ball pace, nor were we creating the right angels to receive the ball. However, we were making enough passes and forces enough mistakes, to tire our opposition. The first 20 minutes seemed never ending but finally, we were awarded a short corner. Another foot and another corner – straight strike from Syms, who slotted it bottom corner.

This gave us a new lease of energy, and with a substitution, we went back to our normal formation. We dominated the remainder of the half and over the next 15 minutes, we scored three more goals, all of which came from excellent team play. Two attacks down the right hand side, resulting in Richie dribbling along the baseline, before crossing it to Flo who skilfully slotted past the keeper… I won’t repeat the second goal from Flo, as it was almost identical to the first. The third goal, which also came from Flo, was a rebound of a rebound which fell to Flo on the left post, where she deftly pulled the ball back and casually played it past the keeper.

At half-time Lauren was relatively impressed by our performance, and said that our hard work in the first 10 minutes had allowed us to score the goals later into the first half. The second half, however, was going to be a struggle. With Poppy’s knee worsening, we knew we had limited minutes from her and the four substitutes for OKs were going to make a massive difference. They came out strong, and they had a couple of very useful and fast younger players, who were able to create lots of 2 vs 1s against us. The second half is more of a tired blur but there were some highlights.

1. We had lots of shots on goal and their keeper made some unbelievable saves.

2. Shout out to Evie, for stepping up to keep for us, who not only maintained a clean sheet, but had to make some extraordinary saves in order to do so.

3. Flo not only scored a hat-trick in the first half, but also set up the two goals in the second half. Both of which came from some individual skills, by Flo, who then crossed it to Kitty and Syms respectively.

4. At one point I was unmarked in the D and a bouncing pass came into me, expect, just before it touched my stick, the umpire blew for ‘No Advantage…’ I was very bemused, but thankfully, Will Marshall was on the sideline to explain that “The umpire probably knew you were never going to score.”

The game ended 6-0 to OCs, and we knew we had given everything; not just in the match, but in the last 17 games. Now was a waiting game, as we just had to see if the other results went our way… and in the evening we found out the London Eds drew 1-1 with Spencer 3s, and London Accies beat Wayfareres 3-1, both score-lines going in our favour!

Thank you to everyone who has supported us this season. A special thanks to Lauren Moors for coaching us and believing in us and Katie Richards for leading the way from the front and captaining us to glory. We will miss you both.

Good Luck to those leaving us this season – Molly W, Ella, Flo, Bella and Richie!