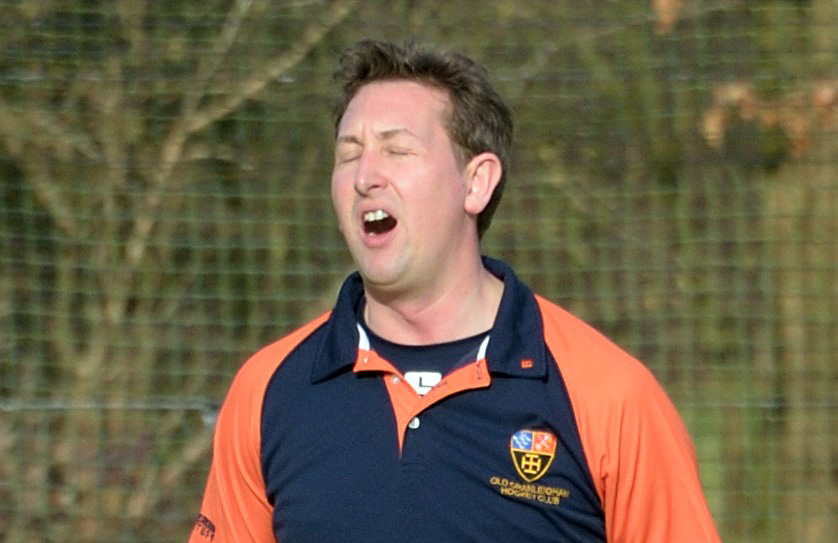 The final weekend of semi-full league action (both 1st XIs finished last week) saw most teams finish their campaigns. The 3rd XI, however, seem likely to head into May with three matches remaining as a result of earlier Covid cancellations.  And while all this was going on, club veteran Nick Lewis finally acquired the nickname he has been hankering after for so many years.

The self-styled ‘people’s team, the Men’s 2nd XI, finished with a 4-2 win at Spencer, a result which confirmed their second-place finish behind Teddington, a side they took four points from. The Men’s 3rd XI beat Surbiton 1-0 (full Knappy special report below), while the Men’s 4th XI pulled themselves clear of the bottom two with a 6-4 win at Richmond, their first points since the end of January. The Men’s Warriors finished off with a 4-1 win over Merton Boars.

The Stormers won the London Men’s O40 Premier without taking to the pitch after Wimbledon failed to raise an XI for a game they had already re-arranged. The points for the walkover meant we edged out Spencer by one point. The Hamstrings also ended with a walkover after the league winners, Old Georgians, cried off.

The Ladies 2nd XI ended a three-match losing run with a 5-2 win against league winners EUHC Gamblers at the lovely Crystal Palace, the Ladies 3rd XI went down 1-0 to Wimbledon 6s, the Ladies 4th XI drew 1-1 v Wimbledon 7s, while the Ladies 6th XI concluded with a 2-0 win at Cheam 3s.

Surbiton 4s 0-1 Men’s 3rd XI
We had to cope without Rona this week who had at last allowed our last patient, The Preds, to return. A well-timed return as he had another seemingly very legitimate goal disallowed by the oppo’s umpire. Thankfully on this occasion it did not influence the result as we hung on to snatch the victory and claim three key points.

The serenity of a relaxed match build up on a Saturday in the sun at TD masked the new record of Whatsapp messages flying around from Monday to Saturday morning. Wils was dressed up in a form of S & M outfit for the weekend, seemingly enjoying the experience, as he joined in the liver abuse brigade. To be fair to Scarney he has resigned as president which explains the host of applicants in the last 3 weeks to take over the role. Scarney is now president of the “What not to eat and drink if you wish to see 50” society being ably guided by Mrs Carne. Thankfully he fitted in the match prior to his becoming an anorexic statistic. A handful of others were missing too but as The Stormers were without a match a combination of Top Trumps and Pokemon played in The Whatsapp playground between the 3s and 4s enabled the 3s to collect Rippers for Mani. Packers was withdrawn from the equation to keep a fair trade. There was a welcome return by Max to the fold although he did seem to have forgotten where the ground was located appearing as we concluded our warm up.

The build up was however far less exciting than the 70 minutes of the game and especially the five minutes immediately post match. Surbiton brought their own umpire on the basis of a very petulant performance by one of our sides in a previous game between the two clubs. Justifiably a number of our players in that earlier match were shown cards. As we waited to go onto the pitch we swapped pleasantries with some familiar faces from our excellent pre Christmas game under the lights and driving rain at Oaken Lane in mid December.

This was always going to be a tight and competitive game and so it proved. Surbiton could not gain one of the promotion spots but nevertheless wanted to avenge the defeat inflicted on them by the north of the bridge mob in the first fixture. The first 15 minutes saw both sides having chances with there being no hint as to how the humour of the game would disintegrate into a swapping of coloured cards, not the Pokemon type. We thought we had taken the lead with a Max crash ball beautifully deflected home by Preds but saw the goal ruled out because the lifted ball was deemed dangerous. Had the ball been heat seeking then perhaps it may have diverted towards one of the defenders to the edge of the channel through which it was struck but no matter as we soon scored our goal. Ish rifled home a drag flick from a short corner won following a great build up down the right hand side. Surbiton looked dangerous on the break with their number 99 probably their best player especially when he dropped further back in the second half but neither side did enough to add to the scoreline before half time.

Both sides had chances in the second period with the two sets of defenders called into action to snuff out attacks whilst both keepers did what they are paid to do when called into action. Our spine of Cato, Max, Scarney and Rippers were excellent and fed our midfield and forwards effectively with Coppers and Ish causing problems down the right with regularity.
Sadly the cards were the winners in the second half. Their 99 was mighty unlucky to receive a yellow late on having regard to many unpunished tackles of a similar nature from both sides with our mysteriously being down to nine for two minutes two-thirds of the way into the game. Fortunately Surbiton’s umpire did not hear the abuse from one player a few feet away from him in the bin with, I can only assume, the fierce wind taking all the sound away to the housing estate on the far side of the second rugby pitch.

There were two curious attempts at humour from the oppo when Lewi received some verbal sledging “you look like Eric Idle” and “you must be the Old of Old Cranleighan”. Rippers, Gav, Eds, Cato and I take great heart from the latter comment whilst the first was quite extraordinary. At least we now have a proper nickname for Lewi., “Eric”.

As the final whistle blew Eric joined the Hall of Villains that now boasts four members with his joining Bruce for his kendo attack 15 years ago, Ports for his hockey career pre Christian conversion and Ed Breton for being Ed Breton.