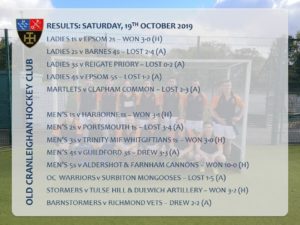 Men’s 1st XI 3-1 Harborne
Coming off the back of a six-point weekend and lying at the top of the table, the 1’s came into the weekends fixture in fine form. As the October rain made way and the sun beamed down across TD, the mood was one of confidence and excitement as the prospect of another three points lay across the minds of all those in attendance.

As soon as the first whistle blew we looked to assert their dominance on the game by playing the attacking and flowing hockey that we are now renowned for and it wasn’t long until we took the lead. A quick counter attack from deep inside their own D saw us fly from defence to attack in the blink of an eye. As Will Marshall picked the ball up in the final third and fired a pitch perfect ball across the face of the goal, Charlie Lamb (looking for his first league goal of the season) came flying in nose to the floor to deflect the ball into the backboard.

We continued to pile on the pressure, pinning Harborne back with an intense high press. It came as no surprise when wes turned the ball over in the middle of the park and what followed was simply quite divine. Quick thinking from Marshall saw an overhead aerial land at the feet of Lamb at the top of the D; confidence flowing from his earlier goal, Lamb opted out of the safe option and proceeded to cream the ball into the back of the goal with a second touch upright reverse.

Two down, momentum began to swing as Harborne fought back and a quick counter resulted in them winning a corner. A mistake at the top of D looked to have negated any corner threat however quick hands from a Harborne player saw some space open up at the top of the D and from here the end result was inevitable as we conceded.

At 2-1 the game was in the balance and we knew that the next goal would be crucial. With a clear brief from the side line to keep things simple and to manage the game, we made things difficult for ourselves. Tired bodies, lead to poor decisions and the ball was turned over in the middle on countless occasions giving Harborne an opportunity to get back into the game. Luckily for us it was not to be for Harborne, against the run of play another quick counter attack from deep inside our own half saw a 2 on 1. Ollie Davies venturing further up field than ever seen before kept his nerve, drew the keeper and calmly passed the ball to Ben Wilson who finished for his first goal of the season. 3-1. Game-Set-Match.

Men’s 3rd XI 3-0 Trinity Mid-Whitgiftian 1s
It was a warm autumnal morning at Oaken Lane for the Old Cranleighans 3rd XI who were looking to bounce back from their defeat to Woking the previous week. Following extensive Friday night administrative duties for skipper Max Arthur, the OCs managed to field a strong 14-man squad, notably boosted by the presence of 1st XI exile Matt Laidman, alongside debutants James Croft and Aidan Thomson. As if to impress the new signings the OCs were treated to a thoroughly professional – and un-3rd XI style warm-up – by Alex Don, with a few grumbles amid the ranks about the quantity of laps.

Following a short foray into the 4-3-3 formation, the OCs took to the field in their reinstated 4-4-2 diamond and looked to start the game on the front foot. However, despite the rigorous warm-up, the game began with an early chance for Trinity Mid-Whitgiftian who – were it not for a fine save by keeper Ross Kingsnorth – could well have taken the lead. Nevertheless, this proved to be one of the oppositions few chances of the game as the OCs began to take control. With attacking threats being provided by both Don and Richie down the right and left flanks respectively, it seemed only a matter of time before the OCs took the lead. Ben Jamieson – returning to the game after an extended sabbatical – struggled, however, to reproduce the prolific goal scoring of his university days and the OCs continued to spurn chances in front of goal. This period of sustained pressure from the OCs saw a series strong expletives from the opposition coach toward the umpire and led to the first card of morning being brandished; that was the last we saw of the oppo coach. Surely an easy DoD vote for the Mid-Whitgiftians? Not long after, the OCs produced some fine hockey… fluidly transitioning the ball from defence to midfield before debutant Fletcher finished it off. Although only 1-0 at half-time, the OCs goal had rarely been threatened and we went into the second half looking to finish off the opposition.

The second half saw the game open up, both physically and verbally. While Trinity Mid-Whitgiftian were busy bickering, the OCs looked to capitalise and before long were two up thanks to a goal from a Croft. As the opposition’s patience continued to wane, the OCs struggled to take a firm grasp on the game and despite numerous phases of attacking play could not find that elusive third goal. Eventually a bit of individual brilliance at top D from Stuckey, whose goalbound reverse-stick effort was cheekily diverted past the keeper by the resurgent BJ, gave OCs a deserved third goal. In the end, it was a fine performance all-round and the OCs were more than worthy of the 3-0 scoreline. Next up for the OC 3s is bottom of the league Purley Walcountians.

Barnstormers 2-2 Richmond Vets
With the both vets sides in action resources were always going to be stretched. Having had to pull out the previous weeks game the Barnstormers were desperate for some action and after having to employ a few ‘you’re a vet and you know you are’ comments during week, headed to Richmond with a full complement, and even a bench (thanks Evo!), looking for their first points of the season.

The first half saw the ball moved around well with some flowing moves from both sides. However, it was Richmond who struck first. 0-1. The Barnstormers responded well with Richie’s shot / come cross deflected just over the bar by Quints who was also causing the Richmond defence problems with his pace and movement. Closey used the aerial to great effect to exploit the space at the back even though his first effort resembled a Tiger Woods snap hook off the first tee. Lost ball. The Barnstormers continued to push for the equaliser, with Mike running tirelessly in midfield, but it was Richmond who managed to score a second. 0-2. The half ended with a flurry of short corners from Richmond but Howard stood firm in goal to deny the hosts and we went into half time just 2-0 down.

After some inspirational words from our skipper at half time we started the second half well and put some slick passing manoeuvres together. One of these led to Quints getting the ball out wide on the left and he put a superb pinpoint pass through to Poen on the near post who just had to stop it and slip it past the keeper. The Barnstormers continued to search for the equaliser with Dougie leading the charge from the back with a few of his trademark runs. With the game opening up and spaces appearing in the Richmond defence it was down to Closey to put Poen through on goal. He rounded the keeper and scored from a tight angle, despite the defender’s best efforts to clear it off the line. 2-2. Both sides had further chances but with no more goals the game ended in a draw which was, on balance, probably a fair result. First point for the season and the Barnstormers are up and running.

OC Martlets 2-3 Clapham Common LX
This Saturday saw our Ladies development team Martlets back in action against Clapham Commons LX. Our more seasoned side were a little slow to get underway whereas Clapham’s young ladies took off from the starting blocks to score twice in the first half. After sweets and a pep talk at half time, the Martlets took control improving their passing and hitting the spaces. Slowly but surely we worked away up the pitch to the Clapham goal to end with Flo delivering a beautiful top D goal to bring us back to 2-1. This was swiftly followed by a second from Zoe striking cleanly into the net. The game was on! We successfully held them at bay till the closing minutes when unfortunately, a small slip up in our D allowed the very quick-reacting Clapham ladies to pounce and end the game 3-2. Our mission for next week… how to get out of the blocks a lot faster!