With the Ladies (mostly) on a half-term break, it was the men who took centre stage for the last weekend of October. Match reports to follow. 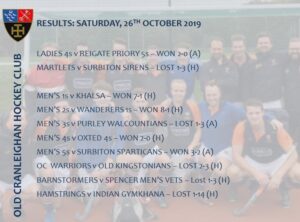 We lined up against Khalsa in the torrential rain bidding to continue their undefeated start to the season. While Khalsa were missing their international flicker, we had a quality flicker of our own. Early in the first quarter Charlie Lamb broke into the circle winning a short corner that was duly dispatched between the keeper’s legs by Matt Murphy. In the ninth minute the same combination combined with Murphy dispatching another short corner won by Lamb. We continued to dominate the ball, carving through the Khalsa defence at ease and three minutes later a strike by Louis Wright ricochet off the keeper falling to Matt Cornwell who finished in to an open net. To finish the first quarter, Murphy once again put away a short corner, flicking it into the top left making it 4-0 to the OCs. The second quarter started in much the same way as the first with Cornwell receiving the ball in the middle of the circle and calmly lobbing the keeper to make it 5–0. We were not done there and once again followed this up with another goal as Ben Wilson got on the scoresheet and made it 6-0 after 25 minutes.

The rest of the match continued in much the same vein as we dominating the ball, but failed to capitalise on the chances until in the 59” Murphy got his fourth as another flick beat the keeper. We looked comfortable throughout the game, however some sloppy defending led to a last minute Khalsa corner and a nice deflection saw the ball end up in goal. The game finished 7-1 as we continue on our undefeated run. November sees the 1st XI hit the road with five away fixtures on the bounce after a well-deserved weekend off.

Men’s 2nd XI 8-1 Wanderers 1st XI
What a day!! A day that for England Rugby and the 2nds, truly showing what they were both capable of..! After the squad had finished watching and celebrating a truly remarkable World Cup semi-final win for England (Sorry Henry about Sunday’s result), it was ready for the main course of the day at Fortress TD. OC 2s V Wanderers 1s – the only team to get promoted while staying the same league as last season (their “1s” got relegated from the same league while this “2s” side came 3rd). So this season they just swapped their names and started the season very well – 10 points from a possible 12 had them sitting pretty at 2nd in the league. In contrast, we were at the opposite end with no wins and second from bottom. Not the way we planned the season with such a talented squad. But this was all going to change and in such a commanding statement to ourselves and the league.

The team selected itself, apart from the controversial pairing in the middle at the back of Gal and Stu R. There is normally only room for one ego there, but we somehow had to squeeze them both in. And if you were there after the game then they would have constantly told you how good they were. It was very visible that everyone was up for the game and in the frame of mind to put any doubts of what we are capable of as a squad to bed. Even Cookie seemed chipper, happy and in the mood. Which we all put down to a slight fever. In the first half, OC’s started with the same speed and intensity all the games both. Put the opposition under large amounts of pressure. Of which it paid off with Cookie finishing off a team move on 7mins with a crisp strike into the bottom corner. The pressure and chances continued throughout the half as they enjoyed the majority of the play amd any dangers posed by Wanderers were extinguished or fizzled out, but OC’s were unable to increase their lead. 1-0 at half-time.

After a few inspiring words from George and to be fair most of the team, it was clear that OC’s were not going to let this game go in the direction of the ones before. A short corner was given 4 minutes into the half and up-stepped the FRJ 9000 to cooly send a thunderbolt into the top corner. 2-0. On 7 and 9 mins after the restart, Roberts bagged himself 2 goals – a perfectly executed p-flick and a slick finish from a sumptuous counter-attack from the forwards. Making up for the last home game that had cost him £51 (£21 for childcare and £30 for the verbal yellow – Cato you have taken that fine yet?). Talking of cards, Henry was off for 2 minutes for not hearing the whistle and hitting the ball away (that classic one). This was followed by Wanderers producing their own attack and OC’s switching off, leading to a clever deflected goal. In a couple of games before OC’s would have let the other team back in. Not this time. 2 more excellent and well-worked goals come in a 2 min period. With FRJ 9000 picking up his second from the top of D with a lovely cut shot through the keeper’s legs. Coops added the 6th and 7th goals. Wanderers were now becoming less and less impressed with the umpires (not themselves as they should have) and in the last minute, it was only fitting that MOM Cookie scored the eighth and his second of the game, wheeling away dramatically in great celebration.

We are now up and running and have set a standard that should be our benchmark as a bare minimum every week. There is still a league to play for..!! Last season Surbiton won the league and lost five games in total. Of which four of them were last in the first seven games of the season. So the dream is still alive.

Now we roll onto next week, where Camberley & Farnborough host us at Kings International College. A team struggling for form, but has always proved a tricky fixture for OCs. A pleasure to watch from the back Gents.

Purley Walcountians 2s 3-1 Men’s 3rd XI
Bemused by the strength and conditioning coach’s lacklustre warm up and with the star playmaker struck down by a late illness, the OCs 3rd XI struggled to get off to a flying start against the league’s laggards but did eventually settle into the game after an early onslaught. Buoyed by the earlier event in Tokyo, the OCs began to show clear intent, defending with resolve and counter attacking with vigour. New recruit James, showing maturity beyond his years, led from the front, aided by Sam who adapted well to the precipitous step up in quality from the 2s. In the absence of the team’s enforcer Charlie Stuck, the elder statesman Nick Lewis and the sliding Ports provided the much-needed aggression that the team of late had been lacking. As the squalid conditions set in and the first half progressed, the OCs retreated into their shell, conceding just before half time. In order to cater for the tiring Don, OCs undertook a reshuffle at the break, moving the Scot into midfield, shifting the skillful duo of Avison and Dave to the inside halves, while giving Alex time to settle in at right back not only for some respite but also to reflect on an eventful twenty-four hours.

Lacking fresh legs and still showing the signs of a nascent team, the second half was an uphill struggle as Purley pressed their home advantage, scoring two more goals with the OCs earning just a consolatory goal. Admittedly subject to some Marius Jonker officiating with a disallowed goal and a wholly unfounded green card for Fletch after some harmless stick tackling, nonetheless the root cause of the loss lay in not being up for a good contest against an impressively committed opposition. While some players were particularly excited in anticipation of the match tea in the brutalist clubhouse, the lately nocturnal other(s) were more focused on getting a much-needed good night’s sleep than an artisan shepherds pie.

Surbiton 2-3 Men’s 5th XI
Week 5 saw the Battle bus take the short trip to our local rivals Surbiton – a team who defeated us twice last year (and perhaps cost us promotion) so we knew this was going to be our first real challenge of the season. We welcomed back several of our up and coming youngsters to the squad but we were seriously depleted in the centre due to non availability from our midfield power trident of Howie, Sam and Rob. That said our squad was a strong one again and after a 15 minute wait for a second umpire we started strong and were rewarded with early goals from Oscar and Jake (both young enough to get low enough to hit two accurate tomahawks). Surbiton came back at us for then last 19 of the half and on several occasions simply walked through a midfield which had went AWOL – it wasn’t looking good.

Surbiton hit back early in the second half with their Penalty Corners being as effective as always and before long it was 2-2 and we were staring down the barrel at the same score as last year when we lost 3-2. One goal disallowed had us worrying if we could break the deadlock. The score did end 3-2 but that was courtesy of another tomahawk from Oscar who waltzed through the myriad of stick tackles in the D to finish with aplomb.

Five wins out of five see ourselves and Sanderstead on maximum points with a six-point berth between ourselves and 3rd place – healthy. Week 6 has us at “home” at Hinchley Wood against Epsom (currently on 3pts) due the fixture being moved from the Fortress due to some Rugby thing.